Lazzara, after half a century of opening new vistas for yachting and designing yachts that please American owners, has come up with an approach sure to make European builders a bit edgy… the Lazzara 84’ Euro.

With innovations certain to be well received by a worldwide audience, Lazzara has a masterful way of blending form and fashion with technical triumph… both above AND below the waterline...​
Continue reading...

From Australian builder Warren Yachts comes a seductive new temptress, an express yacht to be reckoned with and the precursor of some wonderful new waves coming from down under.

Elegance is her middle name and that's only the beginning in a yacht that oozes sexy, sleek lines and takes a melodious approach to the cutting edge of yachting...​
Continue reading...

Technology & Mobility Mix!​
The HOTBOX takes on water and hits the pavement...​

February 10, 2006, MILWAUKEE, WI – Technology has got consumers hooked. We are now logging on and keeping in touch constantly. Travel has opened an awkward gap. A 'zone of silence' exists the moment a business professional steps out of their office and into a vehicle.

Mobile Wireless Solutions, LLC has assembled a technology that allows a traveler to be productive while in commute either via car, bus, train or boat - allowing for zero downtime! The HOTBOX is a single point solution that can be installed into most vehicles to provide consistent, wireless access to the Web. The moment a client steps into a ‘HOTBOX enabled’ vehicle, they can open their laptop computer and wirelessly connect to high-speed Internet access... 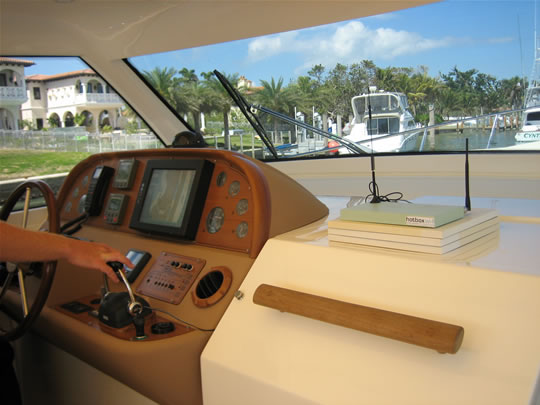 Benetti yachts in conjunction with Fincantieri Yachts, has embarked on a radical new design by Camillo Costantini. A spectacular exodus in yacht design, Marco Polo is slightly gothic, totally epic and an eclectic mix of modern and retro design elements.

Among Marco Polo’s more distinctive features are an enclosed atrium and a 1930’s era, bull-nose bow. With round windows reminiscent of an ancient cruise liner, but sporting contemporary brush-stroke hull windows; Marco Polo unifies the ages, but may divide opinion...​
Continue reading...

The following running shots of the new Westport 164' are among the first images to be released. A full review will follow soon..... 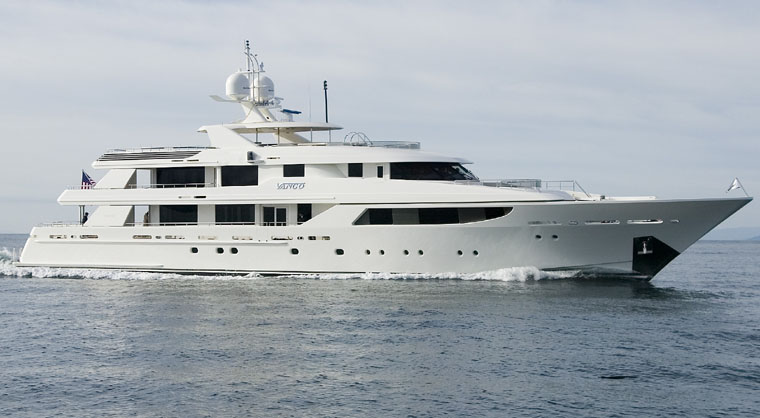 JeMaSa is a twin screw ocean going motor yacht with a steel hull and aluminum superstructure and equipped with facilities that allow her decks to be enjoyed throughout the year. Take the aft deck, for example. In warm weather, this will be the ideal spot to relax in the shade of the upper deck. In strong winds, it can be screened off on both sides. And in cold weather, the entire deck can be enclosed.

JeMaSa has a split level sun deck to accommodate both a helicopter platform and a Jacuzzi. To guarantee exceptional comfort levels, she is equipped with special stabilization-at-anchor systems.

The yacht profile has been designed by regarded Espen Oeino Design and naval architecture has been carried out by Diana Yacht Design... 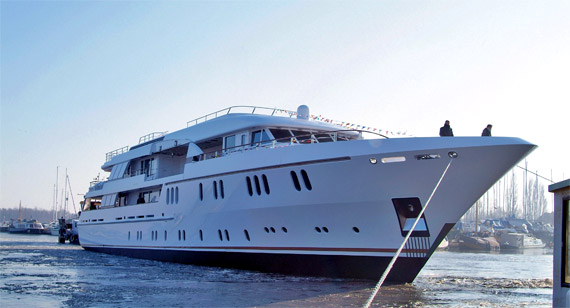 Never resting on their laurels, Stan Antrim and the Shadow Marine crew are preparing to build a venerable City at Sea... the new 205' Shadow "Allure". Highlights include 4 guest staterooms, an aft-facing all glass “Ready Room Lounge” on the helo deck, and a forward facing Sky Lounge on top of the pilot house. It will be finished to the same quality and finish as the Paladin Shadow with all of the below deck spaces finished out to produce the “ultimate” Shadow. It should be... (ahem)... Alluring. 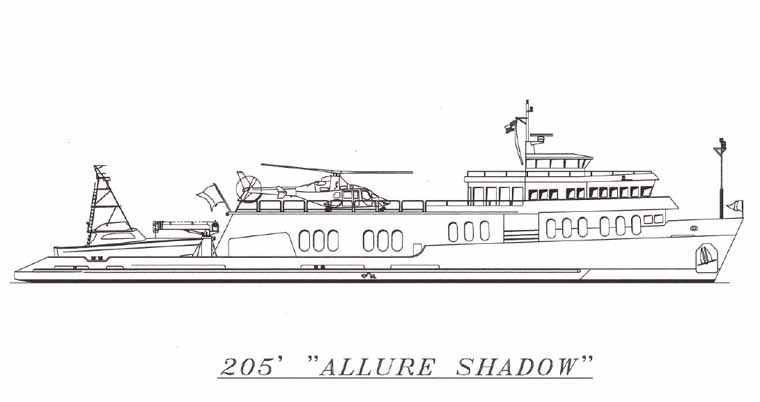 International Yacht Collection (IYC) and Newcastle Marine (Newcastle) are proud to announce the sale of a new build 112' Yacht Series Triple Deck Motoryacht. Working with selling broker Bob O'Brien of O'Brien Yacht Sales in Palm Beach, Florida, Newcastle will begin their second build of an ocean-going Motoryacht in the past year. The first of Newcastle’s Yacht Series is the 164’ Motoryacht "Project H", which started construction in August 2005. Newcastle also has a 137' Expedition Series Yacht ready to launch for her new owner from its facilities in Palm Coast Florida in March 2006.

Michael Burvenich and the team at Murray & Associates are responsible for the yacht design, interior design and engineering. With a beam of 25' 6", a 6’ draft and 10,000 gallon fuel capacity, the 112’ Yacht Series is built for ocean passages, comfort, reliability, and includes many custom designed features for her owners... 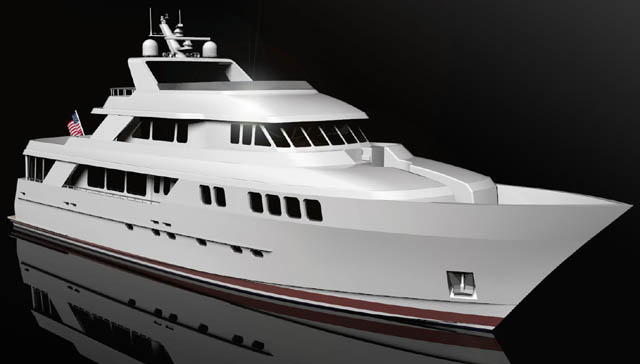 Chasing the wake of the much aclaimed Y701, Oceanco Yachts is proud to unveil the NEW Y702! Another cutting-edge creation by the dynamic design duo of Nuvolari & Lenard, the Y702 is slated to splash in the summer of 2007.

Although there are striking similarities between the two 700-series yachts, there are dramatic differences in features. The 702 upholds the bold, angular look of its sooner-to-be-built sibling, but with smoother contours and streamlined styling...​
Continue reading...

Taking the whimsical approach of that prince of the sea, the dolphin, and adding the workhorse enthusiasm of the traditional lobster boat, Mochi brings a sportive touch to cruising with a DownEast day boat has morphed into the ultimate Lobster yacht.

The new Mochi Dolphin is a super-sized, Italianized version of a traditional DownEaster, whose classic lines infuse a certain style and sea-keeping attribute. Join us for a tour of the newly crowned.....​
Continue reading...

Oceanco's NEW Y702!​
Following in the footsteps of its predecessor, the Y701, which has received extensive build coverage by YachtForums, Oceanco is proud to unveil the NEW Y702! Another cutting-edge creation by the dynamic design duo of Nuvolari & Lenard, the Y702 is slated to splash in the summer of 2007.

Although there are striking similarities between the two 700-series yachts, there are dramatic differences in features. The 702 upholds the bold, angular look of its sooner-to-be-built sibling, but with smoother contours and some refined design elements. It’s not surprising the 701 would have a successor; the design has been so well received it prompted at least one owner to build another.

At first glance, the 700’s look so much alike, one might wonder if Oceanco was building production superyachts, but these are very different builds. The most distinguished difference is the Y702’s new heli-pad...

This 29.5 meter planing hull is an evolution of the Custom Line 94’ and keeps many of the fundamental characteristics that made it a success. The vessel is a result of the ongoing co-operation between the CRN shipyard and the Zuccon International Project Studio that plans the Interior and Exterior layouts. Significant refinements has allowed an interior layout of four sizeable double guest cabins below deck, one more than the Custom Line 94’.

The new 97’s incorporate windows into the hull, so that each guest cabin has a large oval glass panel from which the guests can appreciate the surrounding sea. Underwater lights are provided as a standard feature to enhance this experience at night... 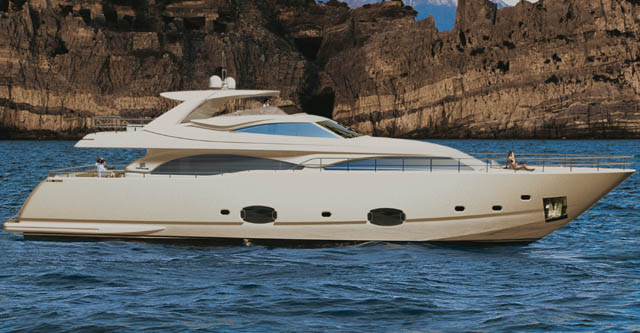 The Outer Reef 73’ is perfect for the single-hand mariner or competent couple who dream of self reliant, self-directing adventure at sea. Engineered with redundancy and durability in mind, Outer Reef’s 73’ is the perfect live-aboard cruiser that will be no worse-for-wear in the years to follow.

Extended passagemaking can take its toll on the best-built boats. As one of the most capable cruisers we’ve reviewed, the Outer Reef 73’ is clearly built for the long leg...​
Continue reading...

Following in the footsteps of its predecessor, which heralded-in an entirely new concept for yachts, Shadow Marine’s “Paladin” made an impressive debut at the 2005 Ft. Lauderdale International Boat Show. A super-size tender of sorts, it has opened up a world of possibilities for yachtsmen.

Shadow Marine has carved an interesting niche in the market and given new life to some seriously rugged offshore vessels that allow unlimited, worldwide cruising with the comfort and security of remaining fully self-contained. Join us onboard the ultimate toy hauler.....​
Continue reading...

Even the most experienced boat-owners can sometimes feel uncomfortable about the prospect of docking a large boat in a congested harbour, especially if the dockside is filled with spectators! Volvo Penta’s new IPS Joystick eliminates that problem. With just a few simple hand movements, you can place your boat elegantly against the dock.

In many respects, the new Volvo Penta IPS system has revolutionized boat life. With double forward-facing propellers and steerable drive units, boats equipped with the Volvo Penta IPS are significantly better than boats with traditional inboard shafts in virtually all respects.

In conjunction with this winter’s boat shows, Volvo Penta will launch the next innovative technological breakthrough in the world of leisure craft:
The Volvo Penta IPS Joystick – an ingenious function that promises to fundamentally change boat life in the future... 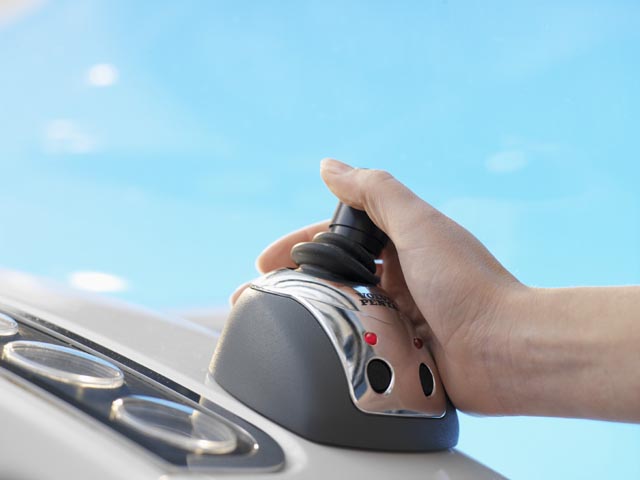 Broward’s “Soulmate”, the grand finale’ of the Denison-designed 20’ beam boats, carries a distinct badge of honor; her hull has been the foundation of nearly 40 yachts dating back to the late 1980’s and benefits from the continuing refinement of an already well-proven platform.

Under the command of Broward’s new owner Tom Lewis, many of Broward’s original management and craftsmen are back in business, embracing the company’s recent resurrection and new direction...​
Continue reading...

In the summer of 2004, Oceanco began construction of an 80-meter yacht, code named “Y701”. This magnificent yacht is a collaboration between Oceanco and the design firm of Nuvolari & Lenard. YachtForums is proud to bring you complete construction pictures of this fantastic new build.

Despite its large dimensions and muscular construction, the Y701 has a sleek, aggressive stance. Her superstructure epitomizes the yacht’s strong character, offering a bold “ship-look", with broad expedition style decks and forward wing stations...​
Continue reading...

Possibly the sexiest silhouette in sportfish yachts, Viking brings out their best with the all-new 68’ Convertible Sportfish, combining the successes of their 65’ and 74’ models with ingenuity and innovation.

Trinity’s 180’ Mia Elise looms up, lovely and imposing. A commanding presence, she is certain to bring appreciative nods at the world’s most luxurious marinas, as well as some green-eyed envy from the planet’s yachtsmen and women...​
Continue reading...

Folding keels come in a wide variety of shapes and configurations, but all have up until now shared the same problem of being a trade-off between the convenience of being able access hitherto inaccessible shallow anchorages and harbours, versus the problems associated with the highly complex engineering needed to operate the lifting mechanisms and a loss of internal accommodation space.

First shown at the Monaco Yacht Show 2005, the Scissor Keel™ from Humphreys Yacht Design typifies their solutions-led approach to the design of superyachts. Humphreys took as their brief the twin objectives of designing a lifting keel that firstly would present no danger to the yachts in the event of catastrophic failure, and secondly would not take up valuable accommodation space within the hull of the yacht... 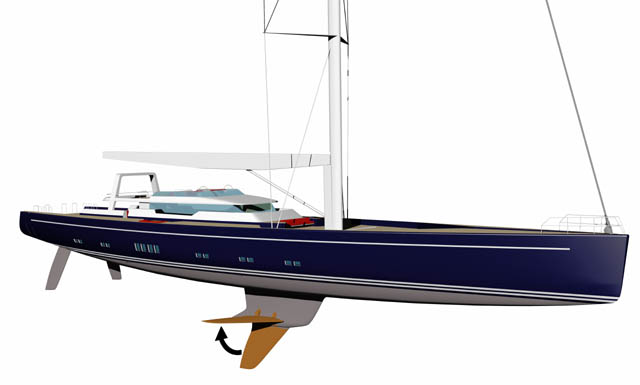